LG Is Staying Ahead Of The Green Race, As Pollution Becomes A Global Crisis 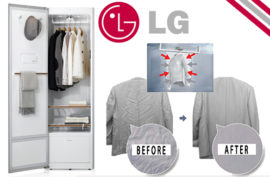 Air pollution is fast becoming more than a pressing global concern. The human species faces the risk of extinction with he environment becoming less healthy every day. For example, in Mexico City, Tehran, Kolkata, Bangkok, Shanghai, and hundreds of other cities, the air is no longer safe to breathe.
In some cities, the air is so polluted that breathing is equivalent to smoking two packs of cigarettes per day. What has gone largely undetected is the chain reaction caused by industrial air pollution that ultimately boils down to affecting individuals in their homes. While allergies have never been a walk in the park, a number of factors have combined to make allergies more frequent and compound their effects.
Perhaps most concerning are reports that global climate change has the potential to exacerbate certain forms of seasonal allergies.
With pollen and other small particles poised to become a more serious issue in the years to come, homeowners are looking for ways to fight back. Appliances like vacuums and washing machines also play a key role in eliminating allergens and other contaminants from the home.
The need to present a comprehensive solution posed by allergens prompted LG to seek AAFA (Asthma and Allergy Foundation of America) seals of approval on its full range of home appliances.
Moses Marji, LG Electronics General Manager Marketing says that in addition to recognition for its eco-friendly air purifiers and vacuum cleaners, LG is also helping to eliminate allergens from clothing through its washing machines and the innovative LG Styler.
“An added advantage is LG’s innovation that provides environmental benefits alongside convenience through the use of the Inverter Linear Compressor. This motor is the workhorse inside many of the company’s most popular appliances, allowing for impressive energy efficiency while improving performance,” he says.
By converting power supplied to the compressor and motor to the ideal voltage and frequency, LG’s Inverter minimizes energy waste and works very quietly. No energy waste, and no noise pollution as well!
In the words of Kumi Naidoo, Executive Director of Greenpeace International, “there are two possible routes to affluence: either produce much, or desire little.” The only countries that are going to do well in the future are those that win the green race. With such advanced technology, how is it possible to not win?

June 29, 2018By Femme StaffLeave a comment
FacebookshareTwittertweetGoogle+sharePinterestpin it
LG Appliances Seek To Strike The Balance Between Individual And Corporate Environmental ResponsibilityLessons To Pick From LG Corporate Social Responsibility (CSR)