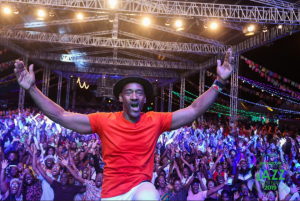 The day kicked off like any other day but this proved to be different among them all. As it is the norm, the sun was up as early as it always does during the month of February.

It was the Jazz day, as I would call it in my own capacity. I have loved jazz ever since I was little and Safaricom has always amplified this feeling within me.

With the advancement in technology, I requested for a taxi through an app. I wanted to enter Kasarani Stadium like a real VIP. With the dust around, I could not afford to walk in with dust all over the way I would do at a local stadium. This was a special one.

For more than 5 years, Safaricom Jazz has entertained you with nothing but the best of local and international jazz music, featuring incredible electric performances that move the crowd with rhythm and ecstasy.

From legends of jazz music to the funky beats of Kenya’s finest, Safaricom’s International Jazz Festival has never disappointed, and its 6th edition was even better!

The sizzling heat couldn’t stop jazz lovers who chose to brace the merciless equatorial sun to flock into Kasarani for a performance of their lifetime. The unforgettable event left many wishing for more as the thrilling performances were nothing short of heavenly.

The 6th edition of Safaricom’s International Jazz Festival featured more than nine bands from across the world who entertained the crowd of jazz lovers that flocked Kasarani stadium.

Safaricom’s CEO, Bob Collymore himself was present and he welcomed Marcus Miller, the main act on stage.

The two-time Grammy award winner with his characteristic bass sound gave the fans a taste of what jazz truly is with hit such as ‘Just the Two of Us’, Luther Vandross’ ‘Never Too Much’ alongside other songs he has performed with other musicians like Aretha Franklin, Elton John, George Benson, Chaka Khan, David Sanborn, Herbie Hancock, Eric Clapton, and Bryan Ferry.

Moved by his marvelous performance, the crowd couldn’t help but sing along and his performance, for lack of a better word, he was spot-on!

Standing tall on the stage clad in a red T-shirt and a white trouser, his figure was pronounced and as the fans sung along to his music, some watched in disbelief, probably for having seen him for the first time.

Others who marveled at his performance exclaimed at how is bass voice is rich, and “oh so beautiful” to listen to.

JazzRausch BigBand somehow managed to steal the show when they walked on stage. They were dressed in black with a signature mark of a similar on their faces, and no sooner had they began blowing their instruments, the crowd was already on its feet!

The band, which hails from Germany was led by Roman Sladek and they delivered a performance that lasted way more than 20 minutes as they tried to keep up with the audience’s insatiable thirst for their beautiful melodies.

Kenya’s very own Kato Change also took to the stage and paid tribute to the late Ayub Ogada by performing his hit ‘Koth Biro‘. Her performance gave the audience a different taste of jazz with a combination of myriad instruments delivering sweet symphonies that they had no difficulty relating to.

Other performances that carried the day include the lineup Safaricom had introduced among them our own Ghetto Classics and The Safaricom Youth Orchestra, Toine Thys Trio featuring Herve Samb from Belgium, Yazmin Lacey from the United Kingdom, Viviane from Portugal and the Omri Mor Trio Israel.

Watching Viviene perform, for one, was like watching an angel play an instrument. Her voice, her composure, and the liveliness she brought to the stage couldn’t be disputed.

One couldn’t help but notice that 6th edition of the Safaricom International Jazz Band was unlike any other. In fact, it was the Coachella of jazz music in Kenya. The whole event was marked by platefuls of saxophone, trumpet, and guitar chops. It was one of a kind. After all, fans expected nothing less.

The security was also on point and there were no incidences reported at all. People were too happy and wasted from too many beautiful sounds and all they could think of was pose for pictures with the musicians.

In fact, Marcus Miller stood with arms spread and a big smile on his face to pose for a selfie capture the audience in the background. It was a sight to behold, and if you failed to make it this year, well, better be ready for the next edition, which will definitely be better!

Here are some photos highlighting how it all went down at Safaricom’s International Jazz Festival in 2019.

Tips to Having a Memorable Safaricom Jazz