Home Lifestyle The Boy from Siritanyi, Beating All Jiggers To Make It In Life

The Boy from Siritanyi, Beating All Jiggers To Make It In Life 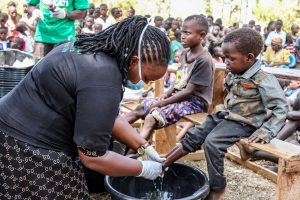 I grew up in Siritanyi, a small village near Kanduyi at the heart of the now Bungoma County. Call me “The Boy from Siritanyi” because that is the name my teachers and fellow pupils ‘baptized’ me with because of some distinctive features on my feet, which I will tell you about shortly.

Growing up in Siritanyi village was no joke. In fact, people often said that if you could survive within the environs of that village, you could survive anywhere in the world including Kismayu. Life was so hard that those who made it, especially in education, would become more famous than the area Assistant Chief.

In 1992, when I was in standard four at the then famous Siritanyi RC Primary School, my family and almost the whole village was infested by Jiggers. Initially, there were cases of jiggers in the village but on that year, the population of those irritating insects was just out of proportion.

In the village, we called them Chinyende or Bichinji depending on their size. My life took a different turn then. My family, was the worst hit by that “natural calamity.” It was as though the gods had decided to punish us. In fact, the villagers nicknamed my dad, Mayende which simply meant Mr. Jiggers.

The jiggers attacked my toes and fingers. It was like they were on a mission to make my then emaciated body their headquarters. My toes moved sideways. It was difficult for people to tell my left foot from the right because they both seemed the same; made for the left. My bowed legs made things even worse. In fact, people joked that whenever I worked, it was difficult to tell whether I was “going or coming.”

All my fingers were bend and my fingernails peeled off. I was a living example of a “walking ghost” and at some time, I thought I was better dead than being alive. Let me tell you, jiggers are a menace. They rob the real you from you leaving you an empty shell with little life inside.

At school, I was stigmatized. Nobody wanted to be associated with me. During group discussions, nobody wanted to sit closer to me lest I “infect” them. I hated jiggers. I hated myself. I hated my friends the more for condemning with into the dark world of jiggers.

No girl wanted to look my way. I was like a disease. A plaque which had to be avoided at all costs. Some said that I was a curse. In fact, some had the audacity to point out that the jiggers were as a result of my ancestors who had risen in another form through me. It was terrible.

There is nothing more painful than being stigmatized for something you have no control about. It leaves you weak. It eats you. It makes you hate everyone and everything.

Jiggers can drive you into depression. You lack peace both within and without. Jiggers are a nuisance. Every time, the toes or the fingers will be itching. You can’t sleep during the night and you can’t have peace during the day.

I automatically went into depression. Was it not for my dad, who had equally been invaded by the vicious “animals”, I would have died. Stigmatization from friends and colleagues at school made things worse than they were.

Last week, as I was busy engaging my clients from my humble office, atop Dereshe Towers, along Murang’a Road, I receive a call from my dad (now 89). The man sounded happy, very unusual of him because the only time he would call me was to complain how there is no rain and why his three cows have nothing to eat.

“Watu was Safwaricom (Safaricom) wamekuja huku. Wametuletea besheni na dawa ya kuua dudu,” (People from Safaricom have come. They have brought basins and drugs to ‘kill’ the insects), he said.

I later came to learn that Safaricom had actually ‘landed’ in my village through the Ndoto Zetu initiative and were helping people within the village with sandals and basins.

To me, this was a miracle. Help whose time was due. A gift set to give hope to hundreds of children in my village. By helping those infested with jiggers, Safaricom Ndoto Zetu is not only helping on a general scale but restoring lives and putting together pieces of life shuttered from within.

Jiggers infestations has been a problem in the community of Siritanyi for the last 30 years.

And, that is the story of “The Boy from Siritanyi”.

How To Motivate Yourself For Exercise