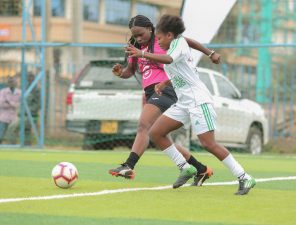 It is a well-known fact that the youth in our country are getting disillusioned, and some of them even losing hope in life due to lack of opportunities. Many of them are highly talented, have the necessary skills and can see these opportunities clearly but lack the platform through which they can move forward and actualize their dreams.

One of the surest ways of capturing the youth is sports since they have the drive, the energy, and inherent interest. Through some support therefore, the youth are able to easily pick up their sporting talent and run with it. Many have even been able to make careers out of sporting.

Yesterday, Safaricom launched the third edition of Chapa Dimba tournament –  a grassroots football discovery and development program which the company runs in partnership with Football Kenya Federation and LaLiga. This is a great platform with which to give aspiring and undiscovered footballers a chance to showcase their talent, and to grow the football scene in the country.

Through the past two seasons of Chapa Dimba which was launched in 2017, talented kids between 16 and 20 years of age have been able to play beyond their dreams, some joining bigger leagues and some even traveling to Spain to experience international football. This season just like season 2, La Liga and FKF scouts will select 16 girls and 16 boys to form an all-star team who will attend a 10-day training camp in Spain during which they will play friendly matches against top LaLiga youth sides.

Registration is open to all youth football teams through the tournament’s website www.chapadimba.safaricom.co.ke/, Safaricom shops and FKF offices countrywide. Teams have upto 6th of September to register.

This year’s tournament will also feature coaching clinics to be conducted in partnership with LaLiga as part of efforts to upskill local football coaches as well.

In just two seasons of Chapa Dimba, we already have impressive success stories, for example this one and this one.

August 14, 2019By Femme StaffLeave a comment
FacebookshareTwittertweetGoogle+sharePinterestpin it
6 Reasons Why a Natural Home is a Better HomeEquity Afia Rolls Out Two Clinics In Ruiru And Nyeri