Farming has long been proven to be quite effective as far as feeding the nation and enabling economic empowerment are concerned, and for good reasons. The need for food will always be there and with the right practices, proper guidance and most importantly availability of stable markets, we as a country can ace this.

The other week I had an opportunity to visit Elgeyo Marakwet County to meet some smallholder farmers who are well on their way to changing the face of potato farming and supply in the country with the help of Safaricom’s mobile agriculture platform Digifarm. When we talk of farmers accessing the right kind of help, this service certainly comes tops among the many other initiatives by different players in the country.

Simply put, Digifarm is a mobile platform that guides agribusinesses and small-scale farmers in the direction of profitability by working with them to address glaring gaps in their operations. It encompasses quite a lot, like offering customized information on farming practices, financial assistance, crop insurance, and access to markets. Ultimately, farmers will be able to earn more from the same piece of land than they would without this assistance. It works on a buyer-driven model and has a ready market for produce as the end game.

As much as I was only able to visit potato farmers, that is not what Digifarm is all about. It works with many different kinds of agricultural produce offering tailor made services for particular crops where they grow best. The mobile farming platform works closely with county Governments to maximize outreach. For example, it is working with farmers in Homabay for Soya, Migori for sweet potatoes and sunflower, Bungoma for Sorghum, Makueni for green grams, Nyeri for broccoli, snow peas and snap peas, Meru for avocado and Tharaka Nithi for Sunflower.

By affording a level of assurance and comfort which farmers did not have before, it is clear that they can spend more time actually farming, than worrying about challenges that crop up left right and center. I was very impressed that the service can help farmers bypass brokers and middle-men who have been the bane of farm produce marketing in this country for far too long – shamelessly shortchanging farmers who do all the work. Sure, there are still a few brokers operating in the areas we visited but they sure are feeling the heat. 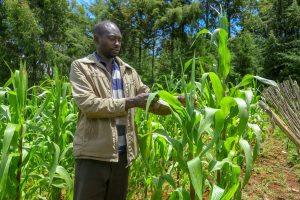 Nickson Kosgey has been on Digifarm for two years now and he grows potatoes, interchanging with peas and carrots. He’s very appreciative of the availability of the Mavuno loan which caters for farm inputs in the form of pesticides and fertilizers. Across the board, farm inputs are easily the biggest challenge due to lack of adequate funds to farmers. Nickson is also very happy for the insurance cover that cushions him against shortages in output, crop failures, and overly unfavorable market dynamics. Before Digifarm, he was only able to utilize a small portion of his farm due to the above-mentioned challenges but with the availability of inputs on loan, he’s able to plant on larger tracts of his land. He’s able to spray pesticides on time, and also to use enough fertilizers since the financial part is taken care of.

He has noticed a sharp incline in yields and money in his pocket since the Digifarm model of marketing is also following the law and not having sack extensions that would see brokers pile on additional potatoes onto the normal sack to near double. He and his wife Vivienne can be assured of a bright future for themselves and their three children, one of whom is just four months old. 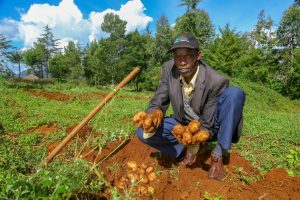 Jonathan Kiptoo is yet another one of the many farmers under Digifarm who has been onboard since early 2018. In a short time, he and other farmers subscribed to the mobile based agriculture platform have witnessed good growth in their morale and their earnings. He would like the platform to expand the market even more since farmers are now able to produce more hence easily meet the demand, and also diversify into other crops to cater for crop rotation. Before Digifarm, he would skip whole seasons due to lack of funds but now with the Mavuno loan, he’s able to make full use of his farm since inputs are given in advance and deducted only after the produce has been sold. 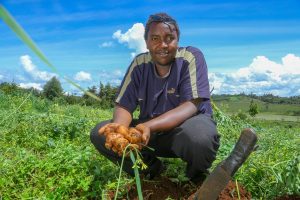 One other farmer that we met in Elgeyo Marakwet is Ezekiel Kimeli. He stood out because he’s one of the young men who has said no to rural-urban migration. A horticulture graduate of Egerton University in Njoro, he understands agriculture to a pretty good extent and he knows that he can build his life around it. Three years ago when Digifarm held a public baraza in his village, he attended and registered without needing too much convincing.

He has been doing subsistence farming for a long time but when Digifarm came along, he was not afraid to grab the opportunity to make more from the farm which he shares with his father. After all, the service rides on the back of Safaricom and he, therefore, had no doubts about its safety, thoroughness, and delivery. The father and son team are now fully commercial farmers who can utilize not just their farm, but also hire some more farms in the neighbourhood.

Ezekiel is quite clear on the negative role that brokers have always played in the farming industry in the region and is more than happy to be working with the Digifarm platform that is helping tone them down. He’s aware that they’re fighting back and spreading malicious misinformation about the service since it is eating into their ill-gotten profits and empowering farmers.

To put the market and the brokers system in clear perspective, a 100kg potato bag was going for an exploitative 600-700/- in 2016 thanks to brokers. But Digifarm bought the first harvest at Kshs.40 per kilo. For a 70kg bag therefore, farmers were catapulted to 2,800/-, a clear tripling of prices that made farmers. This is the kind of morale boost that is needed by farmers all over the country.

He appreciates that Digifarm is not immune to market dynamics and may not always be able to buy at those prices but all in all, it is much better than what brokers were taking them through. He would like the farm to integrate other crops that do well in the area like cabbage, carrots, peas and eventually even dairy and livestock.

Bottom line, farmers who have embraced Digifarm are neither gambling with where to take their harvest nor watching helplessly as it goes to waste. They’re not left on their own to deal with greedy middlemen. They have expert agricultural extension officers on call. They’re not demoralized by putting in so much effort for so little profits. And with Mavuno loan, they are no longer having to make difficult decisions like whether to pay school fees or to buy farm inputs. Therein lies the ultimate empowerment that Safaricom is aiming for with Digifarm countrywide.