Tecno has clearly decided to make sure that all its fans have new phones by Christmas. What with continued launch after launch of new phones in their existing series in this quota. 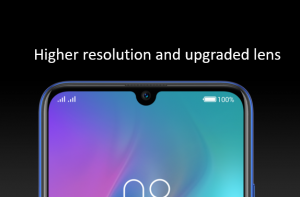 After the launch of the beautiful aurora Phantom 9 last month, there is now word that Tecno is about to launch a new phone in the very photo specific series – Tecno Camon. In short we should be getting ready for the appearance of Camon 12 as soon as next week.

One of the most remarkable features of the Camon phones is photography and especially selfies which have now become quite common place not only among the young beauties but also the older generation as well. I think this phone will therefore appeal to people of all ages. It is said that the Camon 12 will come will come with an upgraded camera for any angle photography. It will be interesting to see how that will be and we can’t wait.

Globally, the Tecno portfolio consist of three series: ‘SPARK’ is with AI bright camera (great camera features especially in low light environment) for youth, the Phantom which is the brand’s flagship series and the Camon which as mentioned is the most popular when it comes to camera features and especially the selfie.

The Camon series also happens to be the best voice of Tecno performance. It is designed for social media enthusiasts who lead the trend and enjoy life by taking and sharing sharp crystal clear photos.

It is said that the soon to come Camon 12 series is upgraded with AI Max Triple Camera to enable super wide angle photography, surpassing Camon series’ DNA of clear selfie, to let you capture a broader perspective in photos.

Leaked images showcase TECNO’s pursuing the extreme frame with super full view screen and obviously higher edge-to-edge ratio than 87.5% of CAMON 11. So the Camon 12 will most likely come with at least 90% edge to edge ratio. 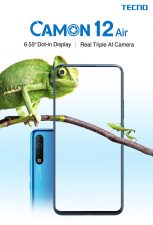 Along with the Camon 12, there may also be Camon 12 Air which could come equipped with the dot-in technology which is currently only available in the Samsung S10. Camon 12 will come at a much lower price though.

Both wide angle photography and the Dot-in Display of CAMON 12 Air deliver Tecno’s commitment to bring best device with latest technology to the consumers. And news says that in the near future, Tecno will launch Dot-in Display product with front camera, to bring any angle nice photography experience with full view screen.

All these leaked features fit Tecno’s recently announced upgraded philosophy. In early July, Tecno revealed their philosophy of “Expect More” from previous “Experience More”, by underlining the brand’s commitment to provide masses with access to advance technology at attractive price-points, allowing them to reach beyond their current limitations and uncover a world of possibilities.