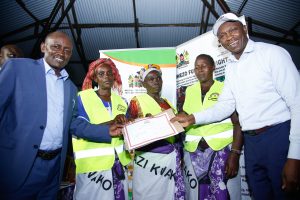 As the Women Enterprise Fund continues empowering women around the country both economically and with business trainings, 58 women groups in Migori County have received Ksh 11 million from the the fund in the last two months.

Despite perceptions here and there that women are being empowered too much, a good 70% of hardworking women actually remain marginalized especially in the rural areas, and therefore unable to expand their businesses. This is the gap that the Women Enterprise Fund looks to address.

In Migori county above, the beneficiaries total to around 634 women who are in groups of an average 10 members per group. The project spans areas of Awendo, Kuria East, Kuria West, Nyatike, Rongo, Suna East, Suna West and Uriri Sub counties which form Migori County.

Speaking during a cheque issuance ceremony in Kuria East, WEF CEO Engineer Charles Mwirigi said the issued funds is aimed at reducing the marginalization of women by empowering them to actively participate in economic development.

“Inability to access the right markets for their products and services has led many businesses with the potential to fail, hence our coming on board to offer Market support which is critical for the growth and general success of women-owned enterprises in Kenya,” said Eng. Mwirigi as he released Kshs.1.2M to 131 groups in Kuria East.

“The loan from WEF has helped our group expand and set up a sustainable table banking platform which has enabled me to expand my business and enrol my son to a mechanical institution. It has empowered us economically as women from Suna East sub-county,” said Quinter Adek one of the beneficiaries from Awang Rech Women Group in the county.

According to Woman Enterprise Fund officer in charge of Suna East Sub County Judith Mwangi, WEF has enabled women to get out from their homes to the Market, where they get economic empowerment. “We train and educate them on different group and individual loan groups that can boost their livelihoods,” said Ms. Mwangi

The Fund offers different kinds of loans to women entrepreneurs that are registered with them, with the loan cycle ranging from Ksh 100,000 to Ksh 750,000 which support women to sustain businesses across a range of industries including; trade, agriculture and manufacturing.

Since inception, at least 2, 360 groups from Migori County have received Ksh 250.85 million from WEF, which has registered an 89 percent repayment rate.

November 5, 2019By Femme StaffLeave a comment
FacebookshareTwittertweetGoogle+sharePinterestpin it
Minet Launches Enhanced Professional Indemnity Cover For DoctorsIn The Footsteps Of Success: The 19 Year Story of Safaricom