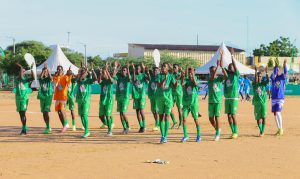 Berlin (Garissa) qualified for the North Eastern Regional finals which is taking place on Sunday 24th November. In a repeat of last year’s regional final, Berlin FC will play against Al Ansar (Wajir). We spoke to Mohammed Deck following his team’s victory.

What made you start playing football?

I started playing football because I was inspired watching the footballers play. Footballers are prospering and taking part in more community engagements off the pitch. When one is a footballer the focus is to be better. Be a better professional and a better team-mater. They are also a reminder that all dreams are valid.

Who is your inspiration in in life. Do you have any one you look up to either in football or in general?

Sadio Mane. He endured hardships growing up but in spite of that he kept his focus and is now a player of one of the best teams in the world – Liverpool. I also happen to be a Liverpool fan which is a win-win for me.

Why did you join Berlin FC?

This is my first season as a player of Berlin FC and what drove me to join them is their unity. The players and officials are committed to making sure that they succeed. Everyone knows their role and they take it seriously. It is also the best team in Garissa and everyone wants to play alongside the best players in the area.

How do you balance between school and football?

I am a college student and I believe everything has its own time. We plan with the coach (Ahmed Mohammed) when the best time to practice is so as not to interfere with my school schedule. He knows the best available times when the players are free and school isn’t in session. Hence we tend to practice very early in the morning, evenings and weekends to accommodate this.

Is playing football in Garissa hard?

Playing football is not hard. As long as you work hard, keep the commitment and practice you will succeed. I don’t feel anything is hard in life.

What role has Chapa Dimba na Safaricom played to the Garissa residents?

It has uplifted the players and given the residents football as an option. In the second season I arrived from Nairobi to watch the Regional final which Berlin FC won by defeating Al Ansar. I was so inspired, I decided to join Berlin FC as a player. I hope next season one of the spectators will also be inspired to participate in season four of Chapa Dimba na Safaricom as a player for Berlin FC.

What is the biggest thing you take from the mentorship sessions?

A good player has to be disciplined and well behaved but the talent needs to also be present. Safaricom has afforded us the opportunity to participate while in Garissa and I know that no matter what career I go into, I will maintain the same principles in order to succeed.

November 23, 2019By Femme StaffLeave a comment
FacebookshareTwittertweetGoogle+sharePinterestpin it
The Tecno Camon 12 – My User Experience And ThoughtsRecent Wins For Safaricom As It Continues Celebrating 19 Years