Lots Of Lucky Winners With The Tecno Take Me Home Campaign – 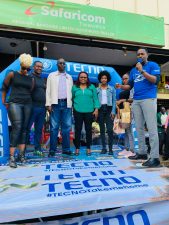 Remember the #TECNOTakesMeHome campaign? Let me jog your memory and also let you know just how far reaching it was, and how it brought smiles to so many participants. The campaign which was well received and well participated among Kenyans  achieved an impressive 27 Million social media impressions and drove a record breaking 2 Million+ engagements across the different social media channels. In the end, it culminated in a fantastic ceremony that saw 50+ customers walk away with a range of gifts.

The campaign saw 30 TECNO Mobile customers walk away with 30 brand new motorcycles and a 500 more receive complimentary bus tickets to various upcountry destinations. The response to the campaign has been phenomenal and this had seen TECNO Mobile extend the promotion further to 25th January.

The #TECNOTakeMeHome campaign made a debut in 2016 and it has seen more than 5000 TECNO customers receive bus tickets to various destination within Kenya. This year TECNO took an extra never-seen-before step and awarded one lucky customer with a brand new car worth Ksh. 1,000,000 through a Facebook lottery. The winners of the car and motorcycles will be awarded at a ceremony scheduled for December 21st, 2019.

TECNO Mobile has continually ran #TECNOTakeMeHome campaign ever since it debut and will continue to run the promotion in the foreseeable future. Every Kenyan Christmas holiday will see a #TECNOTakeMeHome promo.

Look out for the next one for more goodies.

December 20, 2019By Femme StaffLeave a comment
FacebookshareTwittertweetGoogle+sharePinterestpin it
Equity Bank’s Wings To Fly Program Brings To Life Dreams Of Candidates From Vulnerable FamiliesEmirates Taking Environmental Sustainability To A Whole New Level With The ecoTHREAD Blanket