The cancer menace has continued to take quite an upward spike of late and one of the areas that do not get enough attention is childhood cancer. Maybe because affected children are not in a position to talk to the media or be on TV as much as adults are? Because children are not able to communicate their symptoms as clearly as adults and so early diagnosis becomes a problem? Or maybe people still hold the belief that cancer is still for the older generations?

But the fact that childhood cancer does not get talked about or highlighted so much does not mean that it is not there. The World Health Organisation lists cancer as a leading cause of death for children. Children with cancer in low- and middle-income countries are about 4 times more likely to die of cancer than children in high-income countries. Some of the reasons include not having the illness diagnosed, not having access to affordable treatment and supportive care, or to health professionals with specialized training. The good news is that Cancer in children has a higher level of success in treatment than in adults. 80 per cent of children with cancer in developed countries are successfully treated while survival rate in developing countries is at 30 per cent.

Towards improving the childhood cancer scenario, Gertrude’s Hospital Foundation has launched the second annual Childhood Cancer Charity Walk that seeks to raise Kshs. 10M. The funds will go towards proper and early diagnosis of cancer in children, which has potential to be a real game changer. More than 80 per cent of children with cancer can be cured but unfortunately, most of us are not aware that signs and symptoms of childhood cancer are non-specific and are easily confused with other tropical infectious diseases or haematological conditions.

The walk is slated for June 28, 2020 and the theme/aim this year is to train at least two teachers in primary schools neighbouring Gertrude’s Children’s Hospital clinics, sensitise frontline health workers and lab technicians on the early signs of cancer in children and provide treatment to children diagnosed with cancer from needy families.

According to the foundation Manager Dr. Carol Waweru. “The Foundation’s message is to educate the public that children can get cancer, cancer in children can be treated and sensitise health workers on the signs and symptoms of childhood cancers.”

The walk has the full support of the Government and in the words of the Ministry of Health’s National Cancer Institute CEO Dr. Alfred Karagu, “we laud such efforts by the private sector in supplementing efforts by the Government in the war against cancer. Gertrude’s has even gone a step further and has partnered with the ministry to develop the first-ever childhood cancer registry that will inform the Government on the prevalence of childhood cancers in Kenya and ensure efficient distribution of resources”.

With proceeds from last year’s walk, Gertrude’s Hospital Foundation has partnered with the county governments such as Nakuru, Nyeri, Mombasa and Garissa, trained 120 frontline health workers on the early signs of cancer in children and has supported the diagnosis of 9 children who have been linked to treatment. Raising more funds this year will mean that the Foundation will impact more and help improve the survival rate of children diagnosed with cancer in Eastern Africa. 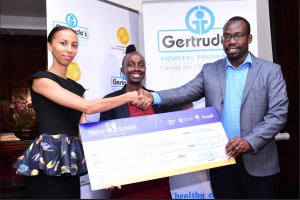 This year’s walk will be flagged off at the University of Nairobi grounds and targets over 1,000 participants including corporate teams. The Walk will include both 5km and 10km at a cost of Sh 1000 for a T-shirt payable through MPESA Paybill Number 434593 and collection will be at Gertrude’s clinics. Makini Group of Schools and UAP Old Mutual Group Ltd are among the corporates that have already committed to sponsoring this year’s walk. It has also received support from the Ministry of Health through the National Cancer Institute and the Kenya Childhood Cancer Trust.

Capitalizing On Artificial Intelligence To Minimize On Energy In Minimalist Living

Residents Of Six Counties To Benefit From Handwashing...

Want To Support A Kenyan In Need? Glovo...

Goby – A WPP Launchpad For Entrepreneurs In...

The Role Of Telemedicine In The Fight Against...