SheTrades – Lifting One Woman Entrepreneur After Another With Absa 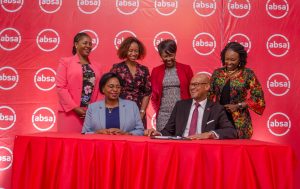 Women entrepreneurs are in for a good run from Absa Bank which has announced a Ksh10 Billion fund to uplift women-owned SMEs in the country. The fund which will run over the next five years will be availed to women entrepreneurs through the existing banking products like secured and unsecured loans, trade finance, asset finance, property finance and capital to start and expand their businesses.

Women form over 50% of the population both locally and globally and are quite active in the SME sector. They however face a number of unique challenges which stifle their full participation in wealth creation and nation building. But with good support like this fund which was announced during the Women in Business forum, then they will certainly be able to overcome these huddles and make something of themselves, their families and the communities around them.

The fund is part of SheTrades – a platform that was launched in 2016 by the International Trade Centre for women to use to share information about their companies, products and services, and to connect with buyers. The bank has implemented the programme for 4 years in the country by now and has so far impacted more than 3,500 women. According to ITC, women-led SMEs represent 20 percent of the businesses involved in international trade. Through the SheTrades initiative, ITC is planning to bring in more than 3 million women led businesses to the market by 2021.

Absa has also revamped Wezesha Biashara, with an aim to provide unsecured loans of upto Ksh.10m, LPO financing and invoice discounting. These will go a long way in facilitating successful running of businesses.

See also, a success story of Mary Munge who is a beneficiary of the SheTrades program. Mary believes firmly in the #SheTradesKe initiative because she will now be able to collaborate with other women internationally and this means that more doors will open. Doors she would otherwise never have known about.

Motor Bike Operators As An Effective Conduit In...

Proper Handwashing – A Crucial Pillar In The...

Keep Your Guard Up. The Fight Against Covid-19...