Belinda Adongo has always had a sharp focus for education. But a few years ago her dreams almost went down the drain when upon getting to Form 2, her family could not afford to see her through the rest of high school. At least not in the school that was in at that time which was good but a bit expensive. A downgrade in schools and sheer determination saw Belinda not only complete her high school but also get a good enough grade to have her admitted to Nairobi University. She’s now a second year pursuing a Bachelor of Science in Finance.

Other than being a student, the 24 year old is also a taxi driver under the Bolt platform and she uses her proceeds not only for living expenses, but also to pay for her University education. So fierce is her drive towards a better future that she juggles work and school without breaking a sweat. But she does take adequate breaks to rejuvenate because she understands the detrimental effects that burnout could have on her job and her school work.

Belinda joined Bolt in March of 2018 after trying her hand at different hustles in the city and so far this is the one job that has been most financially rewarding for her so far. She has also seen the potential for better earnings because for example, so far she has daily school drops for 3 children and has also once picked a long distance ride to Kisii that earned her some good money.

Straight out of fourth form, her first job was to sell dresses for a stall owner at Muthurwa market. In the years between that job of selling clothes and being a Bolt driver, she has tried her hand in many other different hustles like being a promoter at a mini mart and working at a boutique in a mall along Mombasa Road. Then when Bolt launched the bodaboda feature, she took up a job as a promoter to riders where her work was to visit different sheds educating them on the benefits of being on the app, and to on-boarded those who were willing. That was when the idea of venturing into the male dominated field of taxi driving was born. 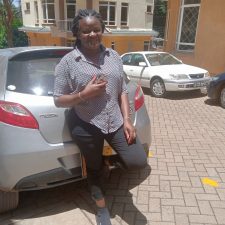 Before joining Bolt she did not even know there was such a thing as female taxi drivers. She only knew of matatu and trailer drivers here and there because she had watched their stories on TV. Her family and especially her mother were very skeptical about her choice of work and afraid for her security driving strangers around the city, but she managed to assure them that all would be well. She also calmed their fears by promising to never drive at night. Well she did eventually start driving at night because she has to make that coin, but she restricts herself to safe routes.

Has she ever encountered trouble clients? Yes she has but security lapses are very few and far between and she has always managed to overcome them. The Bolt app has an SOS feature for both drivers and clients to get emergency security help should they sense trouble, though she has never had to use it. She does however remember a time when she had to re-route to the nearest police station after some clients got into her taxi and started planning on stealing from her. They were conversing among themselves in mother tongue not knowing that that was her mother tongue too.

Would she like a category on the app where riders can choose to be picked by a woman? Not really. One, she feels that this could make her a target and two, she prefers to work it out and shine without any special privileges.

Belinda whose initial ambition was to become a pilot now dreams of starting her own business and she even has a business name in mind. She draws inspiration from the stories of Akothee who was once a taxi driver, and Jalang’o who came from a very humble background and worked his way up through life. She prays to succeed in life and make it up for her mother back home in Migori who has made some major sacrifices to get her where she is.

She’s very passionate about the wellbeing of younger girls and her parting shot to them is to never give up and to never settle. Wake up, dress up and show up, and always leave a good mark wherever you work because you never know when a past connection will come through for you in the future. For instance, she remembers one of her past employers calling her up when an opportunity arose somewhere. She also advises them to work smart and let their work speak for them instead of taking shortcuts.

To date she’s still in close contact with her ‘doti’ – that girl who is assigned to you as an older student to mentor and take care of when they join form one. She would be very disappointed and take it as a personal failure if that girl fell into the traps of early pregnancy and dropped out of school. This is something she has seen in a lot of her former classmates and it makes her sad.

On this International Women’s Week, we celebrate Belinda and wish her all the very best.

Motor Bike Operators As An Effective Conduit In...

Proper Handwashing – A Crucial Pillar In The...

Keep Your Guard Up. The Fight Against Covid-19...