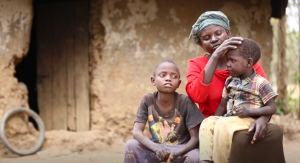 Jiggers still remain a menace affecting thousands of people across Kenya. It is a parasite that is surprisingly easy to treat but has left some disabled and some children from poor families unable to go to school. While others seem to have little concern about the spread and the victims of the parasite, Safaricom Foundation, through Ndoto Zetu campaign is changing one life after another.

It is such a shame for Government and the society to wait until it is a little too late to start acknowledging that something that is easy to treat has become a significant health and socio-economic burden.

Mary Wafula, a mother of two boys in Western Kenya is among the two million Kenyans in 24 counties affected by jiggers. The hardest hit are mostly the poor in our communities who lack the know-how on ways of combating the menace. Or even the will. Talk of resigning to fate.

The story of Mary Wafula and her two boys who have been battling jiggers is a sad one. Looking distraught, confused, and helpless, Ms. Wafula tells of how the fight hasn’t been easy. Patting her boys lovingly on their heads while holding one of them, she says that since 2018, she has been struggling to keep the parasites at bay, but under disadvantaged circumstances that one can already tell, her efforts bore no fruits and the children still have jiggers on their feet.

From where Ms. Wafula is seated telling her sad story, one can’t help but notice the mud hut in a beat state that is supposed to be their home. Conclusively, anyone can deduce that the environment they are living in is a predisposing factor for the jigger menace.

Many households in the Western region of Kenya suffer the same fate as Wafula and her two kids. Most of their homes are mud-walled with rough floors and being crowded, it is almost impossible to prevent the spread of jiggers. The schools are no better. Children from several parts of the community meet there, which further contributes to the spread of jiggers. Some of the schools also feature rough mud walls, which also hide the parasites.

As Mary Wafula says, it becomes increasingly difficult to treat jiggers when all she depends on is medication. She says that she will always give her children medication when they itch but it would seem the efforts are not enough. It is such a sad state of affairs and I’m ashamed to say that I take some of these things so for granted that I have never thought of medication as a solution for the parasites. As much as I can remember, I’ve only had one jigger incident and my grandmother dug into my toe with the sharp end of a safety pin and got it out. In the face of the near calamity that is facing a family like Mary’s, I’m ashamed to say that at that time I thought of my jigger symptoms as a sweet itch.

But jiggers can get quite quite painful and pose a health hazard. Coupled with the lack of the appropriate measures to get rid of to prevent exposure, many people, both adults and children have remained helpless in the Western region. Jigger infection is not only painful but in other cases, it can also cause disability, something that interferes with the walking of the majority of those affected. This hampers their way of life and they cannot carry out their daily activities.

As a result, poverty continues to overwhelm them and in a vicious cycle, the jiggers infection increases. Not only that, it becomes extremely detrimental for many school kids who have no shoes and whose only means of getting to schools is by walking. Adults like Mary Wafula find it hard to work when she has mostly become relegated to taking care of her children. Other adults as well cannot afford to go to work and thus earn no income for their families.

In a nutshell, the lot of people affected by jiggers in Western Kenya have become a stigmatized community as crippled individuals. People who are non-productive and highly dependent on the government and family for help. They have become sickly and over-whelmed individuals.

Eventually, they are discriminated and treated like outcasts simply because they could not get rid of the jiggers. This is perhaps the reason why Mary Wafula sentimentally thanked Safaricom and the Ndoto Zetu initiative for stepping in and helping her treat her children.

Ndoto Zetu initiative is giving people the chance to lead normal and comfortable lives without the hassle and discrimination by other members of society. It is so unfortunate that even with the existence of Anti-Jiggers Campaign, millions of people still suffer from the infection.

Prevention of the jiggers infection is often considered to be more cost-effective than medical treatment, such as what Mary Wafula was using. Of importance is the education and the sensitization of the communities on how to prevent and protect themselves against the parasite.

On the other hand, treatment options include bathing of the patient’s foot in a solution, and in more severe cases, the parasites are surgically removed to save one from being permanently disabled.

With the help from Safaricom, Mary Wafula now stands a better chance of ensuring that jiggers infection doesn’t affect her two young boys again, and while there are countless other families that need help, the least that we can do as fellow human beings is to fight the menace together. We can also try to win the battle on jigger menace by teaching those who are affected to recognize and use community structures for positive behavior change in jigger prevention and control.

It is only by embracing the spirit of public and private partnership that all of us can implement sustainable hygiene practices to eradicate jiggers in affected area and to ensure that children like Mary Wafula’s boys have a happy life like other kids high in the society. Thank you Ndoto Zetu for leading the way.

How To Motivate Yourself For Exercise

How Consolidating Your Tools Can Improve Your Life