“Jazz is not just music. It is a way of life, it is a way of being, a way of thinking”. These are the words of the brilliant Nina Simone, a musician and civil rights activist who although no longer with us, cannot be forgotten for her contribution to the genre, and to music in the 50s and 60s, and even as recently as the 80s. If you want to get a feel of Nina’s beautiful, heartfelt and no-nonsense performances, have a peek at Mississippi God Damn. Nina was and is still a legend. She was a rebel. A Politician. And one daring daring woman. She was a movement and a force to reckon with, and seemed to carry around this well placed anger. Watch the riveting documentary ‘What Happened Miss Simone’ and you’ll see what I mean.

Back to Jazz, International Jazz day is a UNESCO endorsed day that is held every April 30 – no mean feat and a clear testimony to what Jazz means not just to the world of music, but to that of history too.  “UNESCO believes in the power of Jazz as a force for peace, dialogue and mutual understanding and this is why in November 2011, the UNESCO General Conference proclaimed 30th April as International Jazz Day. 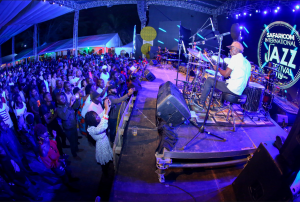 Like in earlier years, Safaricom Jazz was not left behind in commemorating and celebrating this historic day. Since it was ‘born’ in 2014, Safaricom Jazz has continued to grow the jazz scene in the country by attracting more and more fans young and old to the genre, and by offering a platform for local jazz musicians to showcase their acts to Kenyans. It has also brought to the country international stars who we would only have ever dreamed of seeing perform live. Some of my absolute favourites are the late Hugh Masekhela from South Africa, Fatumata Diawara from Mali, and Salif Keita also from Mali. 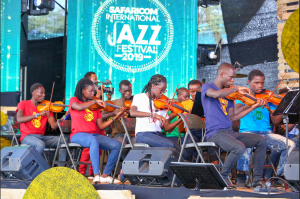 Last week on May first Safaricom Jazz brought to us quite a line up at the Carnivore Grounds, and the fans did not hesitate to show up. This time round, we were celebrating African Jazz with the headline stars being master drummer Paco Serry from Côte d’Ivoire, and Cheick Tidiane Seck from Mali. There were also performances from local stars who have since become household names, like Ghetto Classics to whom all proceeds of Safaricom Jazz Festivals go, the ever-vibrant Nairobi Horns, The Kato Change who is a self-taught guitarist, and the power music couple Jacob Asiyo and Kavutha – Mwanzia. And who can forget South African drummer boy Mandla Mlangeni! South African Jazz will always be quite a vibe and they did not disappoint. 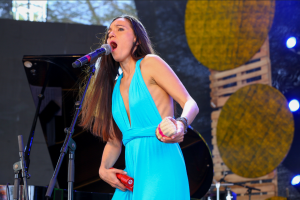 Among the performers we also had Jazz Brigade featuring Dorota and Hendirix who brought in a touch of Poland sounds. This particular performance started off on a low note and I remember wondering whether it would redeem itself. Turns out I wondered too soon as soon enough they hit the high notes and delivered a very riveting show which left me wondering what I was on about earlier :-D.

Overall it was as always a very entertaining show, and well worth the Kshs.2,000/- for adults that Safaricom charges to get into the venue, and 500/- for students. It was a family show and the kids were well catered for with a play area. Security was as always top notch and so everyone felt safe.

Doesn’t she look amazing?. She gets to take home a Samsung S10 for being the best dressed at the #SafaricomJazz
#EveryNoteCounts pic.twitter.com/4lQ9MJ9qiw

The set up was beautiful and with the choice of venue being Carnivore Grounds, there was plenty of food, drinks and very clean washrooms throughout the day and into the early evening. To spice up the show, there were competitions where fans won goodies and my most memorable was that of best dressed in African attire, whereby the lovely lady in yellow won a Samsung S10.

It’s a beautiful day and I’m out for #SafaricomJazz Something to put a smile on my day. And yes I came through in my Ankara. We’re celebrating African Jazz after all! ?
? @Shiko_Msa pic.twitter.com/bkYK1BHysh

It was quite a lovely day with quite a number of highlights, one being that even though we’re in the middle of the rainy season, the sun came out in all it’s splendor and fans were able to walk around, mingle, and have a good time.  Another highlight for me was the performance by the kids from Ghetto Classics who keep growing and growing in their craft. They’re the ones who opened the show with the National Anthem, before going ahead to play a few more of their acts.

Why You Should Embrace IT In Your Business

Let Your Presentation Do The Talking