Report – How Women Want Their Maternal And Reproductive Matters Handled 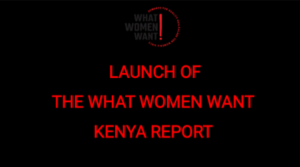 Last year, the White Ribbon Alliance spoke to over 1.2 Million women and adolescent girls globally and asked them what their reproductive and by extension maternal health looked like to them. What they would like to see incorporated in their care when they go to give birth or to seek other personal health services. The goal of this initiative was to gather the demands of these women and girls and bring them to health leaders. To “generate political commitment, investment, and accountability for what women want for their health, as they define it”.

From the #WhatWomenWant report that has recently been launched by @WRAglobal about the state of healthcare systems especially in regards to maternal and infant health, it is clear that a lot still has to be done. pic.twitter.com/PzXNQzQOZ4

Following a successful world-wide drive to talk to women, the report is now out and was launched a few days ago.

The truth is that there are many heart wrenching stories from all over the world about the challenges that women face for nothing other than just being women. And yet, it is not that they do not have a voice, it is that nobody gives them a chance to speak out. Their voices have been systematically suppressed for so long, to a point of being completely shut off in many cases. Years of unchecked cultural conditioning have seen women cower in the face abuse, lack of privacy, sickness, and death of either themselves or their babies.

Corruption and bad Governance have seen deplorable health services become so normalized that even when faced with gross negligence and unsanitary conditions in hospitals, they take this in stride and resign to the fate that it is what it is. Except there is nothing normal about hospitals lacking basic supplies like water and gloves. There is nothing normal about a laboring woman walking for almost 20km to access a health facility. Especially because for some unfortunate ones, time catches up with them as they make the painful walk and they end up giving birth in open fields on the way to hospital.

It is also true that majority of maternal and infant deaths are preventable. It’s just that Governments and policy makers do not ask women what their priorities are before sitting in boardrooms and passing resolutions.

Then there are the baffling cases of rude and even violent medical staff.

In 2013 in a hospital in Western Kenya, a woman was verbally and physically abused for giving birth on the floor. The accusation was that she was dirtying the floor. Why she was giving birth on the floor in the first place is that she was left to her own devices in a hospital. The very place one would expect to get utmost care. Luckily, the unfortunate incident was captured on video, shared to the world, and action taken.

A few months back a video of a mother giving birth along the cold corridors of Mama Lucy Hospital here in Nairobi broke many a heart. Soon after, another case emerged from Athi River where a mother gave birth unassisted at the reception of a hospital while the nurses who were present comfortably sipped tea.

These are the cases that have escaped to the world from hospital corridors and one can’t help but wonder, how much more is going on behind those walls?

Labour is already intensive as it is. Why put mothers through more heartbreak and distress? Not to mention the psychological wounds that even time may never heal? I wouldn’t want to go into the politics of women being their own worst enemies because mistreatment is inexcusable from whichever quarters. But the fact that a lot of these cases of abuse are woman to woman – female caregivers to laboring mothers – makes things this much more painful to watch and read about.

What satisfaction does anyone get from turning the arrival of a baby into a mothers’ life into a moment of grief and anguish instead of the joyous one it should be? No system wants broken hearted mothers and sickly infants and this then leads one to wonder, why isn’t enough being done about it? Why are women not being listened to enough? Why won’t those making policies about women reach out to those very women for their input about issues that directly affect them?

All these questions beg for a high level of accountability. As an individual, you may not be able to build a hospital but what is the little you can do? For me I can start by rising my voice in whichever platform that I have an audience. I’m optimistic that my voice will join other voices and reach a decision maker who will get the wheels rolling. Actualization may take time due to factors beyond my control but that does not mean that I will keep quiet.

Women have spoken out and it is time to listen.

More Goodies From Safaricom As It Cuts Internet Prices For Business