Domestic Abuse Is Not Only Messing The Victims, But The Economy Too 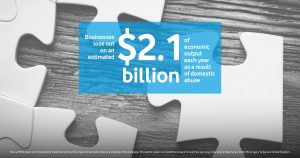 Despite the best efforts to fight gender based violence from different quarters, the menace continues and every other day we wake up to tearful cases in the news and on social media. In the last few weeks we’ve been fixated on the case of Lucy Wangui whose boyfriend, in her words, not only knowingly infected her with HIV, routinely threatened to kill her, and often beat her up even when she was expecting his child.

According to a study from KPMG commissioned by Vodafone, and subsequently the report which was published ahead of the International Day for the Elimination of Violence against women, almost 2 Million women in Kenya alone have faced domestic abuse in the last 12 months. As women spend time nursing the effects of abuse, their careers and businesses are taking a hit due to reduced productivity. Some are skipping work altogether and this translates to loss of income to them, and to the economy as a whole. Cumulatively, 5 Billion is lost by Kenyan businesses each year as a result of work absences related to domestic abuse. The full report is available here.

A lot, if not all cases of violence against women stem from toxic masculinity and this really needs to be checked. Fighting toxic masculinity is not a fight ‘being a man’ at all. Nobody is asking men to be women. What has to be taught though is the difference between masculinity and toxic masculinity. The parts of society that still consider aggression and sexual conquest as primary virtues of manhood needs to realize that such beliefs are not moving us forward, just making breaking women’s spirits and messing with their mental, physical and psychological well-being.

What’s with all this violence?

Violence is complex and comes in different styles like physical, sexual, verbal, emotional, and cyber bullying where for some reason, people feel the need to hide behind their keyboards and pseudo names and abuse total strangers.

Generally one of the bigger problems is that due to cultural and religious norms, some men often feel the need to take total and unfair control of their women and children. This sense of entitlement often goes hand in hand with other discriminatory attitudes like sexism and sexual abuse. The need for a man to cement their power through brute force.

Sexual abuse is one of the worst atrocities that can be meted on a woman. Yet it is also taken very much for granted, vaguely defined and rarely reported especially if it happens within the confines of a relationship or marriage. Men’s entitlement to women’s bodies seems to be widely accepted and promoted in some quarters and the sad bit is that beyond the obvious like criminal rape, some women do not understand what constitutes sexual abuse.

How do we stop this?

As a prerequisite to dealing with abuse, improved reporting mechanisms is a good place to start. For example, Safaricom has partnered with Healthcare Association Kenya – a Non-Governmental Organisation that operates a Sexual and Gender Based Violence rapid response call centre. Safaricom comes in to zero rate the toll-free line (1195) so that services such as nearest hospitals and police stations are quicker to access.

November 26, 2019By Femme StaffLeave a comment
FacebookshareTwittertweetGoogle+sharePinterestpin it
Leveraging Digital Transformation To Drive Corporate Performance Across Businesses In KenyaWhy Economic Empowerment Of Women Is Important