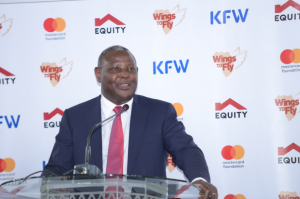 Julius Soitanae Leyian is a young Maasai lad whose life so far has been nothing but a perpetual struggle. You’d think you’ve had it bad but his is a story that paints a dire picture of misfortunes, poverty and near lost dreams.

His life started turning upside down when a series of unfortunate events started creeping in, starting with the death of his father in in 2012. Along the way, his mother who was left to cater to him and his nine other siblings got into an accident which ended in disability. He then developed chronic eye allergies that warranted continuous and consistent treatment and management. At such a young age, everything seemed to be falling apart, and as days went by, life became unbearably difficult.

Living in a leaky Manyatta wasn’t helping things either. During the rainy season, his dream for an education got this much further. And as if all these challenges were not enough to beat a young man’s spirit down, school fees soon started running short for him and his siblings. With this kind setup, concentrating in school obviously got extremely curtailed but as much as everything was pointing him to give up, he did not. He trudged on, wearily, to the end; and as grace and good luck would have it, his efforts paid off.

He completed his secondary education from Baringo High School in 2019 where he scored an A plain of 82 points. He is now one of the beneficiaries of the Equity Group Foundation (EGF) and Mastercard Foundation’s (MCF) Wings to Fly Scholarship program, which will sponsor his university education.

The Wings to Fly Program is an initiative that was established to support secondary and tertiary education of excelling students from financially challenged families cross the 47 counties in Kenya. Apart from leadership training, the program caters for tuition fees, accommodation, books, uniforms, shopping, pocket money, and transport to and from school during their years of study. The program has so far supported 16,168 bright individuals from poor families in Kenya.

With a commitment to support more 10,000 scholars through two phases stretching to the year 2021, the Wings to Fly program lives true to its word, and Julius Soitanae Leyian is a living testimony.

Mind you this isn’t the first time that Soitanae is receiving support from the program. In 2016 when he began his eye treatments at PCEA Kikuyu Hospital, the Wings to Fly initiative took it upon itself to facilitate his medical care to ensure that alongside his studies, he also got good treatment.

This is what Soitanae had to say when we met him at the 2020 Wings To Fly Commissioning at Kenyatta University last week. “I’m very grateful for what the Wings to Fly initiative has and is doing in my life. I don’t know where I would be right now, but one thing is for sure, I hope to use this opportunity to solve issues of education challenges facing the Maasai people and bring development to my people,”

He intends to pursue a bachelor’s degree in the fields of Medicine and Surgery to further research on eye conditions and bring lasting solutions to those who cannot easily access healthcare in the community.

Soitanae’s story is one among many that the initiative has helped. Lucas Kesi Mwadori and Muli Rose Mawia are other beneficiaries of the 2020 Wings to Fly program.

Muli Rose Mawia who emerged the best KCSE performer in Central Region and position 40 countrywide is also a beneficiary of the Wings to Fly program. With the program supporting her throughout her secondary school education, her fear of letting her sponsors and parents down motivated her to work hard.

Rose’s father is paralyzed from the waist down and he relies on the family for support while her mother who is not really gainfully employed struggles to make the hard-knock life bearable for the family. Raising fees for Rose’s secondary education seemed impossible and just about gave up hope.

She was also at the Wings To Fly Commissioning last week and in her words, “I had no hopes for the future, but I had a dream. A dream that Equity Bank’s Wings to Fly program nurtured and brought to life. They saw the potential in me and made a change in my life by supporting me through high school. Having been given this kind of opportunity, I gave my studies my all and had a strong drive to make my family and Equity Bank proud. My efforts bore fruits and I performed well. Equity has done a lot, brought me from nothing to something,” said Rose as her eyes welled with tears.

Under the full scholarship, all her needs, as well as school fees, were catered for, and in the end, Rose scored a mean grade of A with 82 points, which qualifies her to join a University and pursue her desired career choice in medicine.

Lucas Kesi Mwadori, on the other hand hopes to utilize the opportunity the Wings to Fly program has granted him to pursue Aeronautical Engineering or opt for a course of Artificial Intelligence. He acknowledges that the future of our nation and the world as a whole is in technology.

Lucas father and uncle – both strong father figures in his life – passed on within a short span of time. This left his mother to try and fend for the two families, which meant taking on a near impossible task. Soon enough the menial jobs she was doing started causing her health problems like joint pains and at a very tender age, he found himself accompanying his mother to work so they could make a little extra money for upkeep.

At the same time, Lucas had to focus on his studies if he was going to change the situation at home. Through his schooling, he attended Equity annual mentorship forums and branch check-ins, which kept his motivation on a high. He scored 407 marks in primary school and proceeded to Mbita High School in Homa Bay County where he scored a mean grade of A.

Being one of 2020 beneficiaries of the Wings to Fly scholarship program means a lot to Lucas and his family. His mother will now rest without a worry on how to raise tuition fees and other expenses for his upkeep as he proceeds to the university. He hopes to continue to inspire other students and those who are on the verge of giving up. His advice to them is that each one of us has a special gift, a potential that requires effort and resilience to ignite and keep burning, and that if we all utilized the little that we have, education and financial challenges will soon be a thing of the past. Lucas has committed to impact the lives of other students and his community by continuing what he has always done – offering his time, knowledge and skillset to better their experience through life. 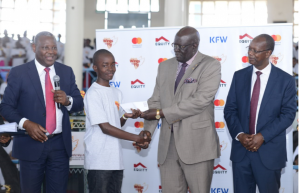 Soitanae, Lucas, and Rose’s stories tell one thing. That life doesn’t come on a silver platter for everyone. Some have it easy, while others really struggle to make ends meet. But in the end, and through little acts of kindness like what Equity Group Foundation and MCF’s Wings to Fly program is doing, vulnerabilities like poverty, disabilities, conflict and gender disparities will eventually be eradicated.

Today’s life is like a marathon race, but unlike the physical marathon which has an end, the intellectual marathon never really ends. You can never kill a dream, and amid millions of dreams that children across Kenya hold, Equity’s Wings to Fly is committed to bringing as many of them to life.

Unlocking the Potential of your Card