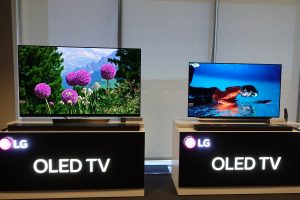 The demand for LG OLED TVs seems to have spiked through the roof as the company rolls out plans to ship at least 4 million TVs this year.

The Korean giant, according to reports has already shipped 1.3 million panels during the first half of 2018.

According to a report by Korean news outlet News1 Korea, LG plans to roll out 3.7-3.8 million OLED TV panels in 2018, almost doubling the 1.7 million shipped in 2017. What does that mean for the company this year unveiled a new line-up of OLED TVs at CES?

OLED TVs from LG have always topped consumer reports tv ratings. The company, together with other global TV brands are adopting OLED display.

LG Display spokesman once told Yonhap News Agency. “We expect to post a net profit in the large-sized OLED segment for the first time in the second half of this year.”

LG Display is the leading player in the production of large-sized OLED panels and says it plans to continue to move past other panel makers on the back of its top-notch technological capabilities.

LG Display spokesperson speaking to Yonhap News Agency said the completion of its new production line in China, which is scheduled for the second half of 2019, is expected to improve the company’s monthly production capacity to 130,000 sheets from the current 70,000 sheets. A sheet is capable of producing six units of 55-inch panels.

As I mentioned numerous global TV brands are adopting OLED displays as they acknowledge the distinctive value of OLED. LG claims the company will continue to make investment to meet with the rising demand in the market.